Shuqaiq 3 is one of the “mega plants” developed in Saudi Arabia. We know a lot about its construction and development, but today we will go into more depth on the special and innovative technical aspects that make this project unique.

The Shuqaiq 3 desalination plant, which is in commercial operation since last January, is known as one of the “mega-plants” being developed in Saudi Arabia that are benchmarks worldwide. With a nominal production capacity of 450,000 cubic meters per day, equivalent to 180 Olympic-size swimming pools, the plant supplies both the population and the agricultural and industrial activities of the provinces of Asir and Jizan. More than 2,000 people participated in its construction, and after its completion, a major milestone has been reached in terms of industrial health and safety, with more nine million hours without any incidents or work-related casualties.

Awarded to the consortium formed by Almar Water Solutions (through Abdul Latif Jameel Enterprises), ACCIONA, Marubeni Corporation and Rawafid Alhadarah Holding Co and with an investment of close to 600 million dollars, the project will contribute to the economic and industrial development of the area.

What is not so well known is the qualitative difference with respect to similar plants that were built in the same period of time and with production volumes in the same range. And this difference is the result of the many challenges unique to this project that the Shuqaiq 3 consortium faced.

Located in southwest Saudi Arabia, the geographic and geopolitical conditions were not the most convenient for the execution of a project like this one. The specific characteristics of the territory, relatively remote in the country, meant that logistics, which are already complicated to start with in this type of project, posed enormous difficulties, reaching their most critical point with the COVID-19 pandemic. Mobility constraints posed a challenge, but the search for alternative suppliers and the reduction of delivery lots minimized the impact.

The location also has a determining influence on water quality. Although the water’s turbidity and temperature are not extreme, there is high biological growth and recurrent red tides in this area of the Red Sea, which presents a huge challenge for desalination plants. In the case of Shuqaiq 3, the technological solutions that have been applied, although they already existed in the industry, had never been implemented in plants of this magnitude. The best example is the pigging system. The pig is a “bullet” of almost two meters in diameter that weighs more than one tonne. It is inserted into the marine pipelines and is propelled by pressurized water to clear out all of the marine growth that has been consolidating inside the pipelines. This growth is very detrimental to the plant because it gradually reduces the internal diameter, generating a potential risk of decreasing flow below the levels required for production.

Minimizing the volume of the controversial sodium hypochlorite, and the shock addition of sulfuric acid, further improve the performance of the membranes in this environment that is so prolific for marine life.

The Shuqaiq 3 plant has more than 7,000 reverse osmosis pressure tubes, which when placed end to end would measure almost 54 kilometers long, with more than 53,000 membranes working simultaneously to produce more than 18 million liters of pure water per hour. 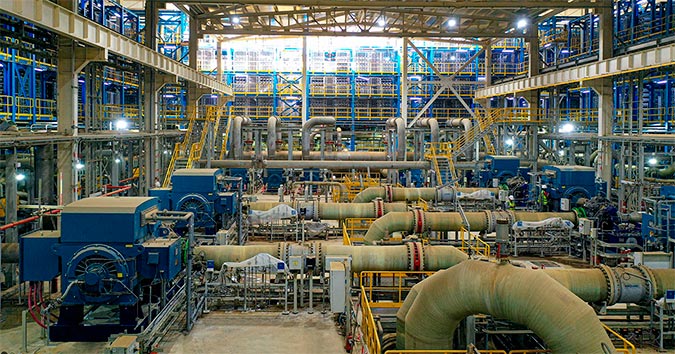 For the water intake, three pipes, 2 meters in diameter and 1.5 km long, buried in the seabed and can take in 1 billion liters of water per day for treatment and purification.

The development of a competitive desalination project is largely determined by its energy consumption. The Shuqaiq 3 consortium was aware that this was the key point to win the contract for this project. Thousands of hours of engineering development and collaborative work with suppliers enabled the plant to achieve its energy consumption targets of around 3 KWh/m3. Of all the solutions implemented, the following are worth mentioning:

Pressure set. This solution, already used in previous projects by the Almar Water Solutions team, is a highly efficient configuration, which combines all the high-pressure pumps to work together, instead of dedicating each pump to a specific group of pressure tubes. This reduces losses and, consequently, electricity consumption.

Development of the membrane configuration. In collaboration with the membrane supplier and working with the projections regarding the raw water quality, the most adapted solution to the environment has been sought, until the optimum distribution of pressure/number of membranes in each step was achieved.

Reduction of residual losses. In every stage of the process, solutions have been sought to eliminate inefficiency, no matter how small. Some examples include the work done in collaboration with the product-water distributor to reduce the delivery pressure by more than 1 bar, or the adjustment of the HVAC system to achieve the proper temperature in each electrical building.

Commitment to the environment

One of the client’s main concerns, and one of Almar Water Solutions’ priority commitments, was to respect the environment where the project would be located within a general framework of environmental impact reduction sponsored by the Saudi government. Shuqaiq 3 is located on the Red Sea and close to a natural park, so all kinds of works were studied and carried out to achieve the objectives set.

Shuqaiq 3 includes a waste treatment system to minimize the pollutants that could be discharged to the sea. In addition, solutions have been implemented to minimize the use of chemicals that can have a large local impact, such as sodium hypochlorite.

These efforts were carried out during the construction phase, as well as after the completion of the plant. The marine construction method included the creation of a pond to collect the excavation material and prevent it from being deposited on the seabed and damaging it, albeit temporarily and in a localized manner. Thus, once construction was completed, both the seabed and the coastline were left in the same condition as before the start of the project.

Today, Shuqaiq 3 is the main water supplier in the region, because the project represented a technological leap forward compared to other desalination plants in the area, based on less efficient thermal desalination technologies.

The project has also stood out for the diversity and integration of the people involved in it, being one of the commitments of Almar Water Solutions. Many professionals from the area have worked together with the corporate team to adapt the resources and to gain knowledge and experience of the area, providing enormous synergy at all levels.

For their part, the client Saudi Water Partnership Company has actively participated in the development and commissioning of the project, resulting a very positive collaboration. Their CEO, HE Eng. Khaled Al-Qureshi, has visited the plant and the team on-site to support the works and provide his extensive experience in the creation of large water projects and his knowledge of the area where Shuqaiq 3 is located.

Shuqaiq 3 has been a well thought out and developed project, both technically and environmentally. Starting with the bidding phase, all the needs of the area and the client have been reflected in order to achieve an effective and efficient plant and a high-quality product water, helping the economy and the daily life of the region. The extreme drought suffered by the region and the scarce natural water reserves, means that projects like Shuqaiq 3 make even more sense to improve the quality of life of its millions of inhabitants and allow a sustainable development of these regions.