From December 2-13, Almar Water Solutions joined hundreds of other organizations at the UN Climate Change Conference to address the growing demands for fresh water and the future of sustainability.

After the announcement of the relocation from Santiago de Chile, the twenty-fifth edition of the UN Climate Change Conference (COP25) was held in Madrid from 2 to 13 December under the Presidency of the Government of Chile and with the logistical support from the Government of Spain, where the President-designate was Carolina Schmidt, Minister of the Environment of Chile.

Almar Water Solutions, which has offices in Madrid, has actively participated in the activities and events of the COP25. The first of them was on 6 December, when Carlos Cosín, CEO of Almar Water Solutions, was a speaker at the event organized by the Foreign Trade Institute ICEX, a public corporation of the Spanish Ministry of Industry, Trade and Tourism and moderated by Mr. Gonzalo Delacámara. The session entitled “Where and how to get water in a world of scarcity” covered three basic vertical axes (reuse of water, desalination and advanced treatment in general and leakages) and three transversal issues (legal and institutional framework, technology and financing). Carlos Cosín, an expert on unconventional water resources, said “Climate change is here to stay. Water is a key factor in the fight against climate change and the water sector must lead the search for new practices and solutions to mitigate scarcity and pollution. This industry can generate new water resources and more effective treatments for a sustainable world, but society must also value its water and foster the measures required to implement these solutions.” 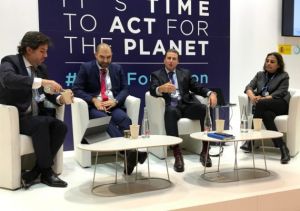 A few days later, on 10 December, Almar Water Solutions was invited to the conference “Let’s solve the climate crisis together” given by Al Gore, former Vice President of the United States and Nobel Peace Prize winner, and organized by the Pure Earth Foundation and The Climate Reality Project. 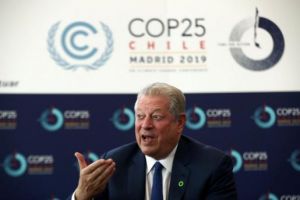 Finally, as a culmination of two weeks of interesting conferences on climate change, sustainability and international agreements, Almar Water Solutions also attended the event featuring the Dubai Electricity and Water Authority (DEWA) on 11 December, where the strategy of Dubai as a city of the future and the one organized by the Ministry of Ecological Transition of Spain “Missions in Horizon Europe: Design and Impact by and for Spanish Society” on 12 December were presented. 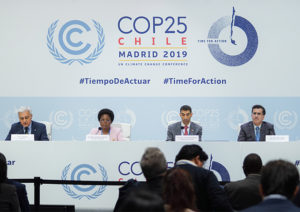 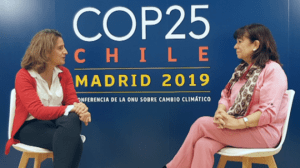 The conference is designed to take the next crucial steps in the UN climate change process. Following agreement on the implementation guidelines of the Paris Agreement at COP 24 in Poland last year, the key objective is to complete several matters with respect to the full implementation of the Paris Climate Change Agreement.

The conference furthermore serves to build ambition ahead of 2020, the year in which countries have committed to submit new and updated national climate action plans. Crucial climate action work will be taken forward in areas including finance, the transparency of climate action, forests and agriculture, technology, capacity building, loss and damage, indigenous peoples, cities, oceans and gender equality.