Shuqaiq 3: a pipeline of potential

The Shuqaiq 3 desalination plant in Jizan province in south-west Saudi Arabia will be one of the largest reverse osmosis (RO) desalination plants in the world when complete in the fourth quarter of 2021.  Awarded to a consortium of Almar Water Solutions (through Abdul Latif Jameel Enterprises), Acciona, Marubeni Corporation and Rawafid Alhadarah Holding Co, the 450,000 cubic meter daily production capacity from this US$ 600m infrastructure investment will guarantee the supply of drinking water to over 1.8 million citizens, while also contributing to economic and industrial development both locally and nationally.

Recognized throughout the water industry as one of the most complex and innovative plants of its kind, in September 2019 Shuqaiq 3 was named the “Utilities Project of the Year” at the Middle East Energy Awards 2019, held in Dubai, UAE, cementing its status as one of the flagship new infrastructure projects in the region.

Q: Shuqaiq 3 is the first large desalination project for Almar Water Solutions. How significant is it in that respect?

CC: It was doubly significant, in that not only was it the first major project for Almar Water Solutions, but along with the Rabigh III desalination plant, it was the first project in Saudi Arabia’s new water privatization program.

Winning this tender with our consortium really demonstrated that we have the experience and expertise to develop – and win – successful bids. It showed that we can be competitive on these huge projects and demonstrated our credibility, both to the market and to our partners.

Q. Almar is a partner in the consortium that was awarded the tender. How important were these partnerships to your successful bid?

CC: These partnerships were essential to the success of our bid.  In Acciona, we partnered with the best EPC contractor with the best references and the strongest credibility; a partner we knew we could rely on to maintain the highest level of quality and deliver the project on schedule and on budget.

With Acciona on board, we needed a strong financial partner with experience and reputation in the sector, someone who was comfortable with the terms of the project and the warranties for the country, and that was Marubeni.

The third key partner is Rawafid, the local partner, who bring a lot of local knowledge and understanding to the consortium, particularly in terms of managing the labor requirements and local issues.

Q. What experience did the Almar team have of the Saudi Arabian market, and of the Middle East water services market in general?

CC: The Middle East comprises between 70% to 80% of the total global market, which is huge.  If you want to be a player in the sector, you have to be in the Middle East. Personally, I first gained experience in the region in the 1990s, working on a couple of smaller thermal desalination plants.  At the time, reverse osmosis membrane technology was still being refined.

At the beginning of this century, membrane technology had advanced to the point where it was even more competitive in terms of efficiency than the thermal process, and so the new desalination plants being developed started to use the membrane process, rather than thermal.

I worked on a major project in Oman and  I also worked on a pioneering project in Saudi Arabia at Al Khafji, which combined solar power and desalination.

In the UAE, we also won two very innovative projects with Mazda.  One was about concentrating the brine discharge from the desalination plant in one specific installation using evaporators.  The second project was a membrane distillation technology in forward osmosis.

So, we definitely have some previous experience of success in the region.  With the Shuqaiq 3 plant, we have demonstrated our experience and our commitment to continue innovating to help find solutions to the water challenges this region faces.

Q. What are the most impressive features of Shuqaiq III in terms of the technology? What makes it special?

CC: For me, there are two special features of this plant.  First is the energy recovery.

Over the last 20 years, we’ve managed to reduce that down to this new level of 3.2kW/h.  I don’t think it’s possible to go significantly lower than this.

Some of the 538.270 meters of wiring being installed at the Shuqaiq 3 IWP construction site

We’ve achieved this not only through the design of the high-pressure pumps, but also because we have carefully designed every element of the project, from pipeline flows to filtration systems, to be as efficient as possible. And I’m very proud that we succeeded.

The second special feature is the intake. To produce 450,000 cubic metres of desalinated water a day, you have to design a pipeline that can intake double the capacity, because around 50% ends up as brine discharge.

So, in this case we need to design an intake that could handle 900,000 cubic metres a day, which is huge, and continue to do so for the next 25 years. It was a great achievement.

Q. Do you think the problem of water availability is going to get worse over the next 25 years?

CC: I have no doubt about it.  Climate change is a fact, and it has been proven that it is accelerating the frequency of floods and droughts.

We have to learn to live with this uncertainty.  And water is one of the key resources we have to defend.

This region – the Middle East – is better prepared than many.  It has put in the necessary resources and infrastructure to fight against the impact of climate change, but there is still much work to do.

Desalination is a key part of that, but it is not the only solution. 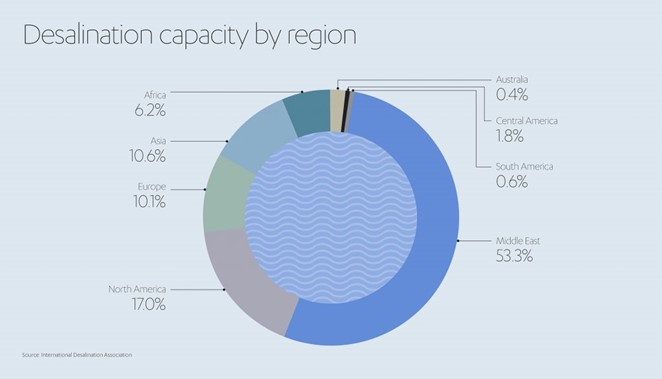 Water reuse also has enormous potential to increase water availability. We cannot accept a situation where used water is just allowed to make its way back into the sea.

It has to be treated and reused, not necessarily for drinking water, but for other purposes such as industry, agriculture or injected into over-exploited aquifers.

I think that’s the next step, as a complement to what is happening with the desalination programs.

Q. As people – and governments – have become more aware of the climate crisis, have you seen a greater focus on issues around water supply?

It was a big step forward in 2015 to see water classified discretely as one of the UN’s Sustainable Development Goals (SDG 6), rather being treated as part of a more general environmental goal, which is what used to happen.

To my mind, water is essential to achieving many of the other SDGs too, like hunger, security, poverty, sustainable cities – none of these are possible without water.

So, it is good to see water recognized in this way at the highest level.  However, when you look at what is actually happening in the sector, it is not so good.

There are some countries that are taking it seriously and putting in high levels of investment, such as Saudi Arabia, China, Singapore, but on a global scale, progress is slow.  No regulations.  No investment.  No real long-term planning.  At least not on the scale that is required.

Q. Despite the challenges of the past few years, you have managed to keep Shuqaiq III on schedule. Do you expect it to be the first of more projects for Almar Water Solutions in the region?

CC: Yes, I hope so.  The Middle East is certainly a region in we have to be in, for sure, because it’s 80% of the market.

Almar has shown that it is a strong, reliable partner with the expertise and credibility to handle these large tenders successfully.

We hope to work on more projects, and we want to expand our offer to include other services, too; other ideas that we have to provide water and services, such as irrigation systems, and in hotels and resorts.

Eventually, I expect it will be a balance between high-risk large-scale projects and smaller, lower-risk projects for different niches in the water industry.  Once Shuqaiq 3 is complete and operational, we will begin the journey again and continue exploring further opportunities.

The huge filtration tanks under construction at Shuqaiq 3 IWP, looking out on the Red Sea